Looking for recommended plugins to install on your Minecraft server? Here you will find the top Minecraft plugins in 2022.

All plugins in this article are completely free, up-to-date for Minecraft 1.16 and have been hand-picked by the Shockbyte team based on 9+ years of Minecraft server experience.

To install plugins, you will need to be running Spigot (or CraftBukkit) as your server type.

Must-have plugins for every Minecraft server

These are the most popular Minecraft plugins in 2022, and are used by almost all of our customers. We recommend these plugins for all Minecraft servers.

There's no #5, but we have more recommendations below!

EssentialsX adds hundreds of useful commands to your server. This plugin was previously known as "Essentials" so it may also be referred to by this name.

Access to all of these commands can be configured per-player or rank with a permissions plugin.

Add unlimited worlds to your server with Multiverse-Core. To create a new world, simply run the command /mv create <world_name>

Each world you add will use up server resources, including your RAM. Keep this in mind when adding new worlds. You can remove worlds you no longer need by running the command /mv remove <world_name>

If you're running low on server memory but want to add more worlds, you can add more RAM to your Minecraft server.

Add ranks to your server and restrict/allow access to commands.

Permissions plugins allow you to create ranks and grant different access to players and groups on your Minecraft server. For example, giving moderation abilities to mods or admins and giving exclusive perks to donators.

We recommend LuckPerms because it has an easy to use web interface and is actively maintained by the developers.

A popular alternative to LuckPerms that we also recommend is PermissionsEx. PermissionsEx is a great choice because it is well documented and there are many tutorials for it. If you experience any difficulty with LuckPerms, we recommend trying PermissionsEx.

If you already have a permissions plugin such as PermissionsEx, you can automatically migrate all of your data to LuckPerms.

ViaVersion allows players to join your server from any Minecraft client version.

ViaVersion requires no configuration, and works straight out of the box.

Upon installation, your server will be compatible with versions newer than itself. This makes the plugin popular for server that choose to run old versions.

This diagram shows which client versions and server versions are compatible together with ViaVersion installed on the server.

Reasons to use an old server version

Don't let these reasons change which server version you choose to run. The newest version is always recommended and is required if you want the newest Minecraft features.

Add-on plugins for ViaVersion
ViaBackwards and ViaRewind allow reverse-compatibility. This means older game versions can join newer servers. But, we do not recommend using these. Both contain bugs and are known to cause issues on servers.

Only attempt using these plugins if you're an advanced user and know how to solve the issues in these plugins.

Protection plugins defend your server against hackers, griefers, spammers and trolls. You can use these plugins to prevent damage to your server and in some cases, roll-back any damage.

These plugins are recommended, but are not an alternative to creating a backup.

CoreProtect is a block logging plugin which allows you to rollback damage to your world and see which player broke each block.

CoreProtect stores every player action in a database. Every time a player breaks a block, places a block

Over time, a CoreProtect database can become very large. You can clear this with the command /co purge t:30d. This will delete all CoreProtect data older than 30 days. We recommend running this command at least once a month.

WorldGuard allows you to set server-wide or region-locked rules to protect or alter gameplay in these areas.

You can create rules such as:

Click here to view all WorldGuard rules you can create.

WorldGuard allows you to enable only the features you want. Everything is off by default. This also means it's safe to install the plugin now, and configure it later.

If you're running a modded server, there's even a version for Forge. But if you're using Spigot (recommended) you can download it from the Bukkit website.

Anti-Hacking plugins block hacks such as:

Why build everything by hand when you can use tools to do it for you? These plugins speed up and help improve your building.

WorldEdit allows you to select an area of blocks and set all of these to a new block of your choice.

There are also advanced features that take this even further, such as setting the area to a variety of blocks, creating different shapes or placing large amounts of blocks from a distance.

PlotSquared automatically generates plot worlds, which are worlds that contain separate plots of land that can be assigned to individual players and shared with their friends.

PlotSquared is popular for Creative Mode servers, because players can only build or destroy in plots they have access to.

Minecraft minigames are gamemodes created inside of Minecraft and are the main attraction of large networks such as Hypixel, The Hive, and Mineplex.

Players spawn on a floating island and must survive and and thrive with the limited amount of resources available.

The best Minecraft server plugin for SkyBlock is BentoBox. However, SkyBlock must be installed as a BentoBox addon (BSkyBlock).

Once you have installed BentoBox, you will then need to install one or more gamemode addons:

Kit PvP is a PvP (Player vs Player) mode where players choose from a pre-defined inventory sets (kits). They use these kits to fight against each other, often earning points and reputation.

You can create your own kits, but some popular ones are:

These plugins are designed to make your server more fun and immersive. They don't necessarily make big changes, but they contain very cool features!

Dynmap creates an interactive real-time map of your Minecraft world that can be viewed via a website URL.

The map will display an overhead view for each of your worlds and will even show the location of players on the map.

The chat feature can be used so players viewing the map on the website can talk to players that are in-game.

Setting up Dynmap is very easy, and we have a tutorial in our Knowledgebase: https://shockbyte.com/billing/knowledgebase/92/How-to-Set-Up-Dynmap.html

Citizens lets you create NPCs (Non-player Characters) on your Minecraft server. These are physical characters that look like players and can have a custom name tag.

There are many uses for NPCs - you could create quest characters that give the player a task or tell a story. Another popular use of NPCs is showcasing the staff of your server.

Holographic Displays creates floating text on your server. This can be used to display information or a label to the player.

You could use holograms to label portals to other worlds/servers, displaying statistics to a player or anything you can imagine!

Create a physical store on your server where players can buy and sell items through signs and chests.

Before installing ChestShop, make sure you also have Vault installed, and an economy plugin supported by Vault such as EssentialsX.

You can find more of the best plugins for Minecraft below. This is a much larger list that contains popular plugins from all categories.

You can find more plugins for Minecraft at:

Are you a plugin developer and want your plugin added to this page? Click here to submit your plugin.

What is your favourite plugin? Let us know in the comments below!

Valheim is a new survival game that is becoming extremely popular. It has become one of the biggest games on Steam right now! More and more people are starting their Viking adventure. We 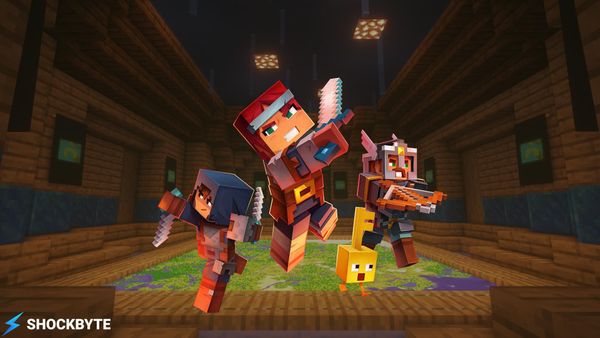