The Minecraft Caves & Cliffs: Part 2 update is finally here for both Java Edition and Bedrock Edition! This update takes you to new heights and down to its darkest depths with the all-new terrain generation. The world of Minecraft will never be the same!

Nine new biomes to explore are making their way into the game.

The new underground biome introduces explorers to stalactites and stalagmites, formed by the new Pointed Dripstone blocks. Dripstone Caves have their own unique atmosphere, similar to that of grand ancient caves. Beware—Dripstone spikes will damage you, so watch your step!

Noise Caves come in three types: wide open, narrow and winding. While similar to regular caves, they add diversity to the exploration by offering unique pathways to the player. Be careful not to get lost in the twists and turns of the winding Noise Caves!

Home to the one and only Axolotl, Lush Caves are an inviting green biome full of unique flora. With moss covering the walls, dripleaves emerging from the springs, vines and glow berries hanging from the ceiling, Lush Caves create a beautiful image for a tired miner. You can easily find the biome by digging down from the Azalea trees in the overworld.

The Grove resembles the snowy taiga but at a greater altitude. The lowest of the newly added snowy mountain biomes, Groves are home to polar bears and other cold-resistant species.

The newly generated mountains don’t have to be cold and intimidating all the time—Meadows offer a different picture for hikers around the same altitude as the Grove. Bees, berries and plenty of flowers are always a sight for sore eyes!

If you’ve ever wondered what it’s like to live an igloo, Snowy Slopes are the biome for you! A mostly sparse mountain biome is home to these icy structures—as well as lots and lots of snow.

Jagged Peaks are the domain of the true cliff stars—goats! Being the only mob to spawn in this uninviting and dangerous biome, Goats can be the source of milk for a weary traveler. After all, who wouldn’t like some cake among the snowcapped peaks?

Similarly to the Jagged Peaks, Frozen Peaks offer little to no foothold. Only the bravest of hikers—alongside Goats, of course—will have the courage to explore the biome! Multiple layers of snow and glaciers of ice are the main features of the Frozen Peaks landscape.

The last mountain biome is closely related to the other lofty Peaks, however instead of snow you will be able to spot gravel. The resemblance is enhanced by the presence of our good mountain buddies—goats.

The Bedrock level is being moved 64 blocks lower, allowing players to dig below y=0 for the first time! And, of course, the brand new peaks wouldn’t be as impressive without the world height limit being raised by 64 blocks as well! Yes. That’s right. Diamonds can now be found at a different depth!

The larger world heights in the 1.18 Caves and Cliffs update are one of the most exciting features, as it will bring an entirely new experience to survival Minecraft as well as an expanded canvas for building.

To accommodate for the new world limits, ore generation is seeing a change, too! The new ore veins will be larger, making resource gathering easier. The layers to hold the veins will also become wider.

One of the minor additions of the 1.18 Caves & Cliffs update is the appearance of candles. Crafted with honeycomb and string, they can be both a more aesthetic source of light if you’re bored of torches and lanterns, as well as a key attribute of any celebration—candles can be combined with a cake to become the highlight of any birthday!

Whether you want to find your first Axolotl among the depths of the underground, meet a Goat atop the highest peaks or even celebrate your birthday with a candled cake - the latest Minecraft update is best explored with your friends.

Explore the new update together in your Minecraft 1.18 server at Shockbyte.

Shockbyte servers support all versions of Minecraft for both Java and Bedrock Edition, including the Minecraft 1.18 Caves and Cliffs Update: Part 2. 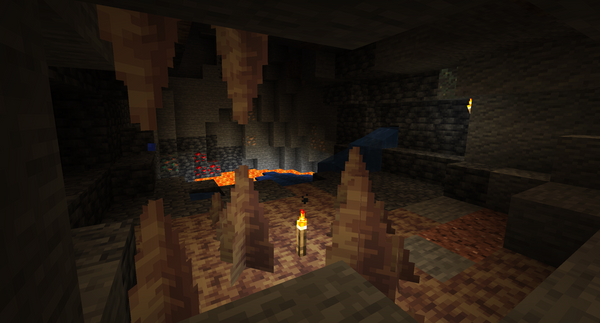 The Caves & Cliffs update brings a lot of cool new features and content to Minecraft! Items ranging from glow berries to raw iron are being added. New mobs like glowing squids and